The Cthaeh is generally regarded by the Fae as the most terrible and malicious being in existence.

The Cthaeh is a creature who dwells within the branches of a great tree, located in the middle of a clearing in the Fae Realm. It is either trapped or forced to stay there by the guardians of the tree, The Sithe. It is known to converse with those who approach it, often displaying a sort of omniscience about the world and the life of the visitor.

According to Bast, the Cthaeh is poisonous, hateful and contagious. It can see all possible futures with perfect accuracy and clarity, branching out from a single moment. It uses this knowledge to cause the worst possible outcomes for as many people as possible. In doing so it often reveals information that will hurt and traumatize those who speak to it. It does so on purpose, since it is regarded as very cruel and malevolent.

It is said that the Sithe kill anyone who speaks to The Cthaeh, and leave the body to rot. If a bird picks so much as a morsel of flesh from the corpse, it is also killed. This is apparently done to thwart any influence the Cthaeh might have on the outside world.

"If anyone manages to come in contact with the Cthaeh, the Sithe kill them. They kill them from a half-mile off with their long horn bows. Then they leave the body to rot. If a crow so much as lands on the body, they kill it too."
―Bast

According to Bast, if the Sithe knew that Kvothe had spoken to the Cthaeh and managed to escape, they would have no qualms tracking him down and killing everyone in the scene, plus burning his inn to the ground. Such is their fear of the effects the words of the Cthaeh can have.

The Cthaeh's tree is used as an artistic symbol in the Fae Realm to warn an audience that a story will have a tragic ending.

The Cthaeh is supposedly responsible for many of history's greatest tragedies. It is believed to have spoken to Jax before he stole the moon, which in turn caused the Creation War. It also spoke to Lanre shortly before he betrayed Myr Tariniel, the event that created the Chandrian. It was also apparently responsible for the Fastingway War. Besides being able to lure people with its perfect knowledge of the future, the flowers of the Cthaeh's tree, called the Rhinna Flower, act as a panacea. They are able to cure any disease or heal any wound.

Kvothe came to the tree of the Cthaeh quite accidentally during his stay with Felurian. Strangely, the Sithe were seemingly absent during this encounter. After introducing itself, the Cthaeh went on to tempt Kvothe with its knowledge of the Chandrian. It revealed that the leader of a group of bandits that Kvothe had recently routed was in fact, Cinder, one of the Chandrian who killed Kvothe's parents and advised him to make his way to Stormwal where he could get his unanswered questions from the people who would believe on him.

After dropping several vague hints to revive Kvothe's memory, the Cthaeh turned its voice to Denna, revealing that she suffered cruel physical treatment at the hands of her patron. During this time it is also suggested the Cthaeh has an animosity toward the Chandrian, Cinder. The stress of these revelations caused Kvothe to flee the tree, his mind shaken and damaged by the experience.

Bast later revealed, during the frame story, the true nature of the Cthaeh, causing both Kote and himself to seemingly sink deeper into depression.

Characters Known to Have Spoken with The Cthaeh

During Kvothe's visit with Cthaeh the creature remains unseen. However, it is of much speculation among fans whether this is because the creature is invisible, moves too quickly, is hidden within the trees foliage, or trapped within the tree. People have wondered about The Cthaeh being Selitos, the Tinker from Hespe's story or the hermit from the same story (Though the hermit is also theorized to be Teccam).

There are hints in the second book, during Kvothe's talk with Cthaeh, that the Cthaeh is not all knowing as suggested by Bast. It seemed surprised that Kvothe wanted to kill the Chandrian: " 'Are you going to try to kill the Chandrian?' The voice sounded fascinated, almost taken aback."

Let's assume Rothfuss chose his words carefully, then this would mean that the Cthaeh is not all seeing, or maybe just not with Kvothe. After all, according to Bast, Kvothe should not have been able to reach the tree in the first place. We don't know anything about the circumstances leading to this but since Kvothe is an unusual character even by Fae standards, it might be possible that even the Cthaeh cannot see everything regarding Kvothe.

Another thought: the Cthaeh said that something scared the Chandrian away which is why Kvothe survived his meeting with the Chandrian. Speculating that this something were the Amyr (some sort of guardians even the Seven are afraid of to some degree) one could argue that the Amyr are so powerful that even the Cthaeh cannot influence their future moves. It is safe to assume that Kvothe will eventually meet with the Amyr (because the Cthaeh said the Maer came close to finding them and that Kvothe will meet the Amyr if he sticks with him) and that this will somehow shield him from whatever future the Cthaeh saw for Kvothe. Or that because of Kvothe's contact with the Amyr, a part of his future is clouded even for the Cthaeh.

The Loeclos box is potentially made of wood from Cthaeh. Kvothe described the look and smell of the wood (lemons) as familiar. 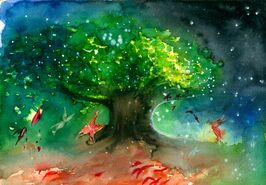 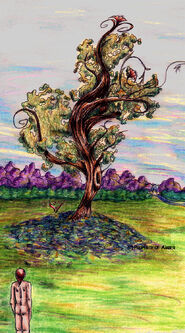 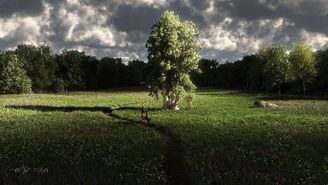