"Who keeps you safe from the Amyr? The singers? The Sithe? From all that would harm you in the world?"
―Haliax to Cinder[1]

Haliax is the leader of The Chandrian, and one of the major antagonists of Kvothe's storyline.

Haliax's most distinguishing feature is that he is completely obscured by shadow even in broad daylight. He wears a discernible cowl, but the rest of him is like looking down a well at midnight. He is described by the Adem as the Shadow-Hamed and it is believed he does not sleep or forget. It is suggested throughout the Chronicle that Haliax cannot be permanently killed by any known means. He displays great power at naming and is also able to become a black shadow the other members of the Chandrian appear to use as a method of transportation.

Haliax enters the story as a mysterious figure present at the murder of Kvothe's Troupe. At the time little is known about his character, but this pivotal scene is instrumental in the personal development of the main character, Kvothe.

Later, in Tarbean, Kvothe meets the storyteller Skarpi and requests the story of Lanre hoping to learn more about him due to a song written by Arliden, Kvothe's father. He learns during this story that Lanre became Haliax.

Though the full explanation of Haliax's motives are vague, it is suggested he gained his power to save his true love, Lyra, but ultimately failed. This culminates in him assembling the group which would eventually be known as the Chandrian and destroying seven of the eight cities left after the Creation War. Most notable of these is Myr Tarinial where he provokes the wrath of Selitos, who curses Haliax and the rest of the Chandrian giving them their folkloric signs. Kvothe personally believes this account to be accurate, though it has not been independently verified and is in fact disputed by his love interest, Denna.

Though Haliax has yet to make a second appearance in the chronicle, the work of The Chandrian and presumably himself, was confirmed in Trebon. Here it is said that members of a wedding party discovered a piece of pottery depicting The Chandrian, which was subsequently destroyed or stolen during the carnage of their attack. This occurence, coupled with the death of Kvothe's troupe shortly after Arliden's revealing song, suggest The Chandrian may have some sort of agenda to destroy information and artifacts depicting themselves.

During Kvothe's visit to Ademre he receives further information about The Chandrian from the Adem's historical records. It is believed by the Adem the true name of Haliax is actually Alaxel. Though this may or may not have implications to the skill of Naming.

Many fans of the series speculate that Haliax may also be the ancient demon Encanis. In the Tehlin religion's account of the defeat of Encanis by Tehlu, Encanis is described as being wreathed in shadow, much as Haliax is. In addition, just as Lanre destroyed six cities in his rampage (plus Myr Tariniel), Encanis destroyed six cities as well before Tehlu stopped him and the seventh city was saved.

Haliax and Kvothe by © Killer Umbrella 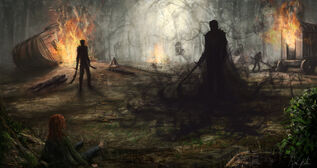 Haliax and Kvothe by © Brad Sutton

The Chandrian and Kvothe by © Joe Harty 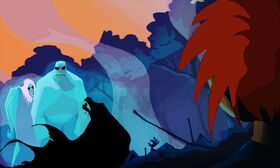 The Chandrian and Kvothe by © Chris Campbell