"This we call the hushed hart. an easy lesson to begin, and one I expect you will enjoy."
―Felurian to Kvothe[1]

Felurian, Lady of Twilight, Lady of the First Quiet

Felurian is a seemingly immortal Fae, known in folktales throughout The Four Corners of Civilization.

One of the magical Fae, Felurian is essentially considered the most beautiful and insatiable woman in the known worlds. She is described as having pale, smooth skin that shimmers in the moonlight, and long black hair "like a sheaf of shadows." She has a petal-shaped mouth and dark, curious eyes. Her eyelids are patterned with designs resembling a butterfly's wings.

Like many Fae, Felurian is extremely mercurial and unpredictable. She can be childlike and adoring at one moment, only to flare into a cold fury when given the slightest sign of rejection. However, she does seem to have genuine feelings of loneliness and desire for company, and when she comes across a lover who can provide her with entertainment beyond that of the flesh, she is shown to be especially delighted.

Kvothe encounters Felurian while travelling through the Eld Forest with Tempi, Marten, Hespe, and Dedan. They come upon Felurian in a moonlit grove, where she is singing. Though all the party members at first resist Felurian's allure, Kvothe decides instead to pursue her in hopes of learning more about magic. He follows Felurian into the Fae where they subsequently couple, and Felurian attempts to bewitch Kvothe. Much to her astonishment, she is instead met with failure when Kvothe displays an uncanny amount of skill at Naming. Ultimately, Kvothe enjoys his stay in the Fae with much more coherence. While residing with Felurian, Kvothe spends most of his time studying the art of lovemaking. He also allocates time to write songs dedicated to Felurian's beauty and skill, as well as swimming and indulging in Faen cuisine. He eventually comes to learn a few interesting historical facts, including that the Order Amyr's founding members were not mortals, nor were they members of the Tehlin Church. The moon's involvement in The Creation War is also discussed. However, Felurian refuses to speak of The Chandrian and even threatens Kvothe, should he so much as inquire about them again.

Kvothe wins his freedom from Felurian by singing a song about her, in which he deliberately understates her sexual prowess. In response to Felurian's fury and indignation, he concedes that he had never been with a woman before, and thus had nothing to compare his experience. Felurian, initially disbelieving, decides that the only way to remedy the situation is for Kvothe to go out into the world, experience the love of other women, and return to her when he is able to accurately describe Felurian's beauty and skill. Reluctantly, Felurian accedes to allow Kvothe to depart from Fae. Before he leaves, she weaves him an enchanted cloak called a shaed, later known as his Shadow Cloak. It is during the construction of this cloak that Kvothe ventures inadvertently into the tree of The Cthaeh. 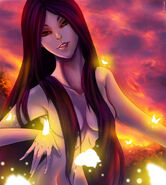 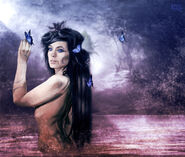