"It is a word. Words are pale shadows of forgotten names. As names have power, words have power. Words can light fires in the minds of men. Words can wring tears from the hardest hearts. There are seven words that will make a person love you. There are ten words that will break a strong man's will. But a word is nothing but a painting of a fire. A name is the fire itself."
―Elodin, The Name of the Wind

Elodin is the Master Namer at the University.

Master Elodin was an exceptionally brilliant student and also the youngest to have ever been admitted to the University, at the age of 14. By the time he turned 18, he had become a Full Arcanist and began working as a Giller. He continued on to become Master Namer and then Chancellor of the University, though the latter was short lived.

He is at least a dozen years younger than the rest of the Masters in the University and is described as an average looking clean-shaven man. His dark eyes are often depicted as his most striking feature. He is well-known for his eccentric personality and erratic antics, including a habit of going barefoot. This causes some in the University to look down upon him; nevertheless, as befits his position as a Master, he demonstrates an understanding of his respective field of study that few in the modern world can equal.

Elodin is best known for his committal and ensuing escape from Haven.

Kvothe meets Elodin at his first admissions interview and subsequently learns a collection of bizarre rumors about the Master. Most notable of these is the story of his abdication from the position of Chancellor and subsequent escape from Haven, which Elodin personally narrates to Kvothe to match the epic cadence of the popular folk story,Taborlin the Great.

Elodin's character is fairly minor in The Name of the Wind, entering primarily to offer Kvothe cryptic lessons while displaying a somewhat unbalanced demeanor. He often offers a unique view of situations the primary example of this being the circumstances under which he sponsors Kvothe to Re'lar.

Elodin plays a much more prominent character in the second installment. He begins a Naming class, perking Kvothe's interest in working with him, though Elodin is critical of this idea. Elodin also demonstrates a much more conspicuous resentment for the Master Jasom Hemme.

On one particular occasion, Elodin goes as far as to deceive Kvothe into breaking into the Master's rooms and thus uses this as an example of why he is reluctant to take Kvothe on as a student of Naming. Ultimately, however, after finding out his relationship with Auri, Elodin agrees to take Kvothe on as his student. He is then instrumental in Kvothe's early readmittance into The Archives.

Elodin's Naming lectures throughout the rest of the story range from unorthodox to (seemingly) totally pointless, much to the dismay and frustration of several students. He is notoriously unreliable and lacking any sense of punctuality, usually arriving late to his own classes and sometimes not coming at all. Despite this, Elodin communicates quite effectively the core aspects of Naming to his students and has some success with his student Fela.

After Kvothe's trial in The Wise Man's Fear, Master Elodin encourages Kvothe to take a semester off and points out the potentials gains for it by explaining the old tradition for Naming students of Chasing The Wind.

The Name Of The Wind

Many people believe that Elodin may have visited the Fae or at least have some knowledge of it, due to his recognition of Kvothe's shadow cloak as a Shaed. During the same conversation in which Kvothe tells Elodin about his visit to the Fae, he also mentions having lived and studied in Ademre. In response to this, Elodin uses the hand gesture for "amazed respect," which implies that Elodin may speak or be fluent in Ademic, and possibly also that he has spent time in Ademre.

It is also widely speculated that Elodin is somehow connected to Taborlin The Great.'' 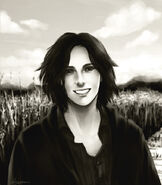 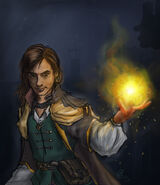 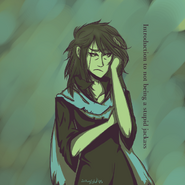 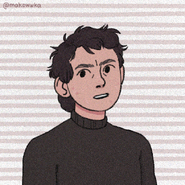