"You think I'm playing at some game? You think iron will keep you safe? Hear my words, manling. Do not mistake me for my mask. You see light dappling on the water and forget the deep, cold dark beneath. Listen. You cannot hurt me. You cannot run or hide. In this I will not be defied."
― Bast to the Chronicler

Bastas, son of Remmen, Prince of Twilight and the Telwyth Mael

Bast is Kvothe's student, apprentice, and assistant who lives with him at the Waystone Inn. He is a main character in the frame story.

Bast is first described as dark and charming. He has a quick smile and cunning blue eyes. His features are sharp and delicate, giving him an almost beautiful visage. Bast is later revealed to be a Fae creature under a glamoury.

His true appearance is similar except for his eyes become fully blue with no sclera and his boots turn to cloven hooves. He is over 150 years old and a noble of the Faen Courts. His full title is Bastas, Son of Remmen, Prince of Twilight and the Telwyth Mael.

Bast and Kvothe have a seemingly close relationship, the origins of which are not yet known. Bast alludes to having an overreaching plan to restore Kvothe's power by making him remember his past and all of the things he has accomplished. The character Chronicler becomes entangled in this plan due to Bast who later reveals that he purposely leaked the location of Kvothe in hopes of attracting attention.

Bast claims to care for Kvothe very much, often referring to him by the name "Reshi," which from contextual clues seems to refer to his position as Bast's mentor. He seems to have a sort of reverence toward Kvothe and his abilities, listening attentively to the narration of his story and also encouraging him to excel.

Bast's alignment is very ambiguous throughout the series. He is often described as graceful and displays a lascivious demeanor. Conversely, he often privately displays a darker side of himself in many scenes with Chronicler and in his final scene of The Wise Man's Fear.

Bast also appears as the focal character in the short story The Lightning Tree which was published in the Rogues anthology. In this story we learn that Bast conducts a sort of business making deals and trades with the children of Newarre.

There is some speculation among fans that Bast is likely of some relation to Felurian, due to her title, Lady of Twilight. However, in The Lightning Tree Bast shows some disquiet when she is brought up in his conversation with Kostrel. 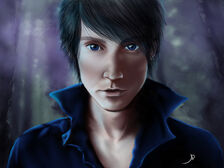 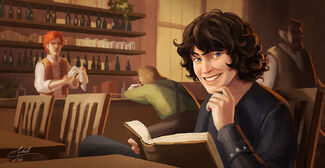