"There once was a ravel named Kvothe whose tongue was quick at quipping. The Masters thought him clever and rewarded him with whipping."
―Ambrose's song for Kvothe[1]

Ambrose Jakis is the firstborn son of a powerful and wealthy nobleman from Vintas, the Baron Jakis. He plays the part of a major antagonist and rival of Kvothe throughout his time at the University.

Ambrose's family is currently 12th in the line of succession to the Vintic throne and Kvothe describes him as richer than God. Ambrose has a bad reputation, most specifically for mistreating women. He is depicted as a high ranking gentleman with soft, pale skin and a constant scowl. He writes poetry and is also a Scriv under Master Lorren.

Ambrose develops an antagonistic relationship with Kvothe from their first meeting in the Archives. Eventually, their rivalry leads to Kvothe's dismissal from the Archives when he is tricked by Ambrose into entering with an open flame. This series of events leads to an ongoing feud and clash of wills between Kvothe and Ambrose throughout the Chronicle. Most notably this conflict leads to Kvothe first speaking the name of the wind after Ambrose steals and breaks his lute.

Even after the incidents of the first novel, Kvothe and Ambrose continue their hostilities toward each other in catastrophic ways. Their ongoing feud eventually finds Kvothe poisoned by the alchemical potion known as a Plum bob.[2]

"A meat pie, or a fruit pie?"
―Kvothe, weighing the worth of Ambrose's life

Ambrose enters a short relationship with Denna but drives her off by getting handsy on their second date and pushy on their third. The loss of Denna's ring leads to Kvothe breaking into Ambrose's rooms, Kvothe needing to discover a schema for and create a Gram and Ambrose's possessions being burned.

It is suggested by Sleat that Ambrose is the one who hired men to attack Kvothe in Imre during the first novel. Ambrose has also so far thwarted all of Kvothe's attempts at getting a local patron, forcing him to eventually accept an offer to leave the University to work for the Maer Alveron.

Many fans speculate (and hope) that Ambrose may eventually be the king that Kvothe kills.

The piracy that is mentioned in Kvothes trip to Severen may have been perpetrated under Ambrose's direction since he was the first to know about it and told everybody Kvothe had died. 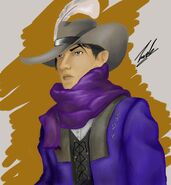 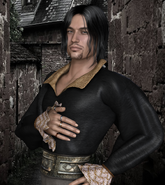